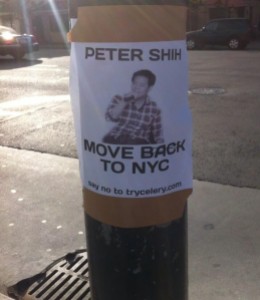 There are now flyers springing up around SOMA denouncing Peter Shih and his Y-Combinator-backed startup.

Last week, Peter published a rant on Medium describing everything he hates about San Francisco. The public transportation sucks, there are homeless people on the streets, the girls are ugly, and so on. We all feel very sorry for you, Peter.

Unfortunately for Peter, the city of San Francisco now hates him back. As if launching a startup wasn’t hard enough, Peter just shot his company in the face. His teammates must be thrilled.

In the end, corporations are people too. Apple was Steve Jobs, Amazon is Jeff Bezos, and Yahoo is now Marissa Mayer. Celery is Peter Shih.

Peter has since taken down his post, and I’m sure he learned an important lesson as well: Don’t publicly hate on the city in which you’re trying to start a company. 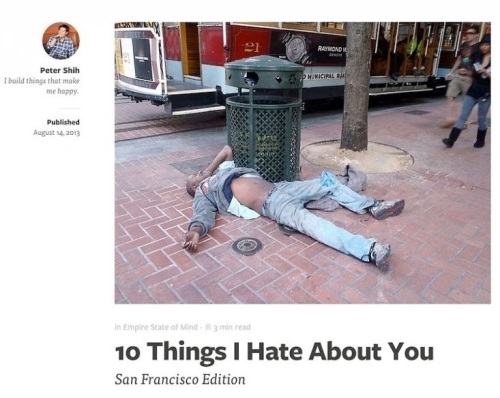 Last week, I rented my car to some kids from Boston College who were out here for a Y Combinator interview. Their startup distributes e-newsletters or something, I’m not sure. I should have asked more questions, but they were too busy getting jazzed about finding an In-n-Out Burger.

Sadly, their team was not selected, but just landing an interview is an accolade. Y Combinator provides the chosen teams with funding and mentorship, but more importantly, it provides a prestigious seal of approval for future investors.

From my view as a spectator, the teams that usually get selected for Y Combinator already have a strong customer base and revenue. In other words, the ones who get in are the ones who really don’t need YC’s seal of approval.

There’s a racing aphorism that I learned back in my motorcycle days: “Being fast is like being cool, it won’t happen if you try too hard.”

That’s because being fast isn’t a target, it’s a side effect. The real goal is to be in total control at all times. Being fast comes as a secondary consequence. Same with being cool. Beginner riders only make real progress once they get over their fixation on achieving speed. Prior to that, they’re chasing a side effect and scaring themselves silly.

The surest way to gain validation in life is to not need it. Why? Because validation is a side effect of already having your shit together.