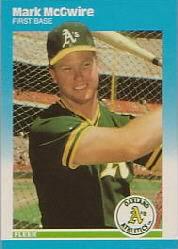 I have some baseball cards from the 80s. They used to give them out in our school lunches. According to Beckett’s Guide, my Fleer Mark McGwire card has a valuation of $120.

Because it’s the holidays, I will sell my card for the blowout price of $119. Send in your offers today!

Wait, what? There is no market for baseball cards because no one has given a shit about baseball since 1992?

The value of an asset is whatever the market is willing to pay for it. You might say that my Mark McGwire baseball card actually has a valuation of $0, no matter what Beckett has printed.

The determination of valuation is regarded as a dark art, but it’s pretty easy to check your work: Is anyone actually willing to pay that price?

Facebook (FB) trades at $79.88 with a market cap of $223B. The market cap is what we, the market, have collectively decided is Facebook’s current valuation.

How do people come to this number? Those who subscribe to Benjamin Graham’s school of value investing might assign a valuation based on the company’s intrinsic value:

Different beliefs about a company’s share price reflect different assumptions on the company’s growth prospects, which is why financial analysts issue many conflicting price targets on any given company.

Yesterday, a little analyst at Citigroup named Mark May announced that Instagram was worth $35B.

Instagram was acquired by Facebook in 2012 for $1 billion. Whether Mark is correct is of no practical value: there is no market for Instagram. It’s like learning that your left nut is worth $35 billion. You might feel warm and fuzzy about it, but there is no actionable information*.

The announcement that Facebook’s left gonad is worth $35 billion was enough to send FB up nearly 2% yesterday. Not only is Facebook unlikely to toss Instagram onto the auction block, it is also unlikely to generate Instagram revenue any time soon. Instagram has an intrinsic value of $0.

Hypothetically, says Mark May, Instagram could generate $2.7 billion in revenue if it were monetized.

The reason why every startup is not assigned an immediate billion-dollar valuation is because best-case hypotheticals often fail to materialize. Also hypothetically, Instagram could become a writedown as fast as OMGPOP, Del.icio.us, Geocities, Myspace, and all those other high-flying baseball cards.

I’ve decided that the valuation of my Mark McGwire card is a billion dollars. Also, it is no longer for sale.

*Valuations on non-marketable assets could be useful for insurance purposes. Kim Kardashian has a $21M insurance policy on her butt. Her appraiser sure has a fun job.