Charles Darwin, a most rational fellow, made the decision by weighing the pros and cons of marriage. Here are his notes: 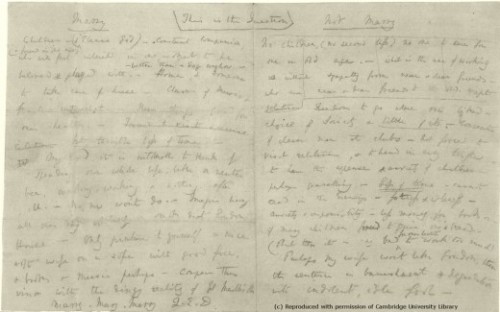 Marry
Children — (if it Please God) — Constant companion, (& friend in old age) who will feel interested in one, — object to be beloved & played with. — better than a dog anyhow. — Home, & someone to take care of house — Charms of music & female chit-chat. — These things good for one’s health. — but terrible loss of time.
My God, it is intolerable to think of spending ones whole life, like a neuter bee, working, working, & nothing after all. — No, no won’t do. — Imagine living all one’s day solitarily in smoky dirty London House. — Only picture to yourself a nice soft wife on a sofa with good fire, & books & music perhaps — Compare this vision with the dingy reality of Grt. Marlbro’ St.

Not Marry
Freedom to go where one liked — choice of Society & little of it. — Conversation of clever men at clubs — Not forced to visit relatives, & to bend in every trifle. — to have the expense & anxiety of children — perhaps quarelling — Loss of time. — cannot read in the Evenings — fatness & idleness — Anxiety & responsibility — less money for books &c — if many children forced to gain one’s bread. — (But then it is very bad for ones health to work too much)
Perhaps my wife wont like London; then the sentence is banishment & degradation into indolent, idle fool

He lists approximately 11 arguments in favor of marriage, and 13 against. Based on these counts, a very rational person ought to decide against marriage. However, six months later Darwin married his first cousin. Why did he arrive at this seemingly irrational answer?

I suspect that Darwin used a more complex modeling system than simply counting line items. Darwin adds “Conversation of clever men at clubs” as an argument against marriage, but suppose these clever men decided to get married? To ensure decisional accuracy, Darwin likely multiplied his total number of friends by their individual probabilities of marriage.

And then the children. Darwin had ten children with his cousin. As an evolutionary theorist, he must have considered the strong likelihood that many of his children would come out severely retarded. The “Loss of time” and “less money” arguments must have been compounded by additional losses incurred from caring for ten inbred kids.

Actually, Charles Darwin probably did not go through a complex technical analysis to arrive at his conclusion. Weighing pros and cons does not work, no matter how precise the calculation, because a single compelling cause trumps a million slightly-influential arguments.

Darwin’s pro-marriage list claims that a wife is “Better than a dog” — wow, if that is not the argument to end all arguments, I don’t know what is.