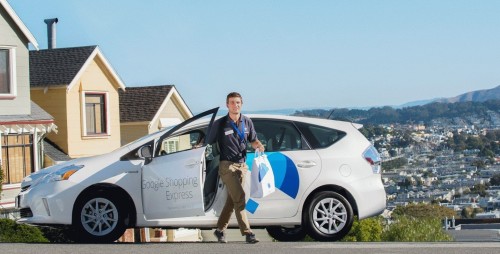 As a bit of a late adopter, I did my grocery shopping through Google Shopping Express for the first time a couple weeks ago and I am instantly in love.

Google Shopping Express offers a seamless shopping experience where shoppers can browse a selection culled from a dozen stores, including Staples, Whole Foods, Smart & Final, and Toys ‘R’ Us.

I placed two orders, one to be delivered to Barnacle’s Mountain View office and one to our San Francisco site. Because I have a discerning palate, it turns out that the orders came from nine different stores. Whew, I thought. That sure saved me a lot of work!

How it Works
Google has order fulfillment reps hanging out at each of the retail stores. These reps receive orders and pack them for delivery. Couriers (outsourced to 1-800Courier in SF, Modern Express in the South Bay) come to a store, pick up packages for an area, and drive door-to-door making the deliveries.

Customer Experience
Because my order came from nine different stores, eight separate vehicles showed up at our offices. Only eight, because my Teriyaki Yakisoba from Smart & Final was canceled from the SF order: Out of Stock in Daly City. I received that same item in my Mountain View order, because it was still in stock in San Mateo.

In SF, three drivers showed up one at a time with our chips, crackers, and ramen, over a span of 4 hours. I received an email saying my Monster Energy Drink had been delivered, but nobody had shown up with it. I sent an email inquiry.

In Mountain View, I received my Teriyaki Yakisoba and Cracker Jack. Then it was noon, and I left for a couple hours to go feed homeless people. I returned to see three messages saying my almonds had been delivered, my ramen had been delivered, and an unsuccessful delivery attempt was made on my shampoo and that it would be redelivered the following day. I couldn’t find the purported almonds or ramen, so I emailed customer support.

The response:
“Hi Elaine,
I’ve connected with the courier. It looks like the Blue Diamond Toasted Coconut Almonds were left inside building 1599, around 12:02 PM.”

That’s down the street from our office. Now, I don’t fault the courier for being unable to find my address, because the building numbers are difficult to read — But is this what delivery has come to? Best effort? Is it now acceptable for the postman to drop my mail off at my neighbor’s house — “Ehh that’s close enough”? This time I had only ordered instant ramen and almonds, but what if my neighbor had received my weekly subscription of adult diapers and incontinence wipes?

Anyway, the ramen had seemingly vanished, but the remaining items were redelivered to Mountain View the following day. So Google Shopping Express got a 40% success rate at our Mountain View office, which is three blocks from Google’s main campus.

Our SF order did better with a 60% success rate: Only one canceled item and one missing item. It looks like mysterious disappearances are common.

Are They Profitable?
Ah, there’s the billion-dollar question.

Orders are transported in cute little Priuses, so the vehicle operating cost is far lower than the cost of hiring a courier. I assume that Google is optimizing for the courier’s time by designating one courier per store. Time spent consolidating orders from separate stores would be better spent driving.

After my 6-month free trial ends, the delivery cost is $5 per store. Would this be profitable? Even assuming that Google Shopping Express charges an additional commission to the stores themselves, the answer is…probably not. BUT, if Google replaces those expensive human couriers with self-driving cars, then the answer could be affirmative.

Environmental Sustainability
Based solely on miles traveled, it is more efficient to send multiple delivery vehicles instead of having customers make individual shopping trips. But there is still the question of whether or not I like having five separate people knock on my door to hand me one item at a time. The path from car to doorstep is the most error-prone part of this supply chain — why replicate this link with each delivery?

I suspect that Google is failing to account for redelivery attempts in their process of minimizing courier time. Google’s self-driving cars will be better at learning my address than hired couriers, so that should improve the delivery success rate.

That leaves the final piece of the story, which is a picture of all the packaging my eight items arrived in: 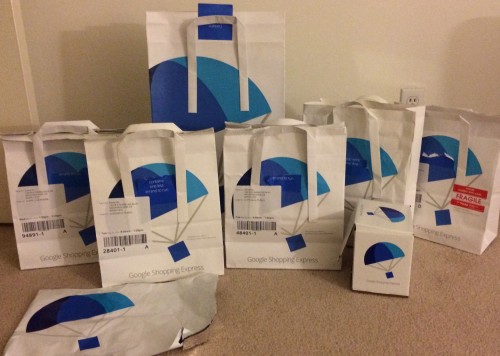