Here are 9 companies whose boards must be in bed with the devil or something, because I have no idea how they still manage to exist.

1. Toys R Us: To be fair, they’re not really still alive. They were purchased in a fire sale by Bain Capital and Kohlberg Kravis Roberts & Co. back in 2005. An IPO was scheduled for 2013, but plans were dropped amid declining sales. Toys R Us was my favorite store as a kid, so that’s why it gets to be at the top of the list.

2. GameStop (GME): As a slightly older kid, I used to come here with my brother to buy Pokémon cards. I’m pretty sure that hasn’t been a thing since 1999. Now GameStop’s remaining customer base consists of teenagers who still haven’t figured out how to jailbreak their PS3s.

4. Barnes & Noble (BKS): I feel bad picking on these guys, because they have put up a valiant battle. But instead of buying Borders, they should have jumped into the grave with them.

5. Radio Shack (RSH): Radio Shack was founded nearly a century ago, back when radios were state-of-the-art electronic equipment. I haven’t set foot in one of these in decades, and can’t imagine what could possibly be inside. Vacuum tubes and HDMI cables? Does anyone even own a radio anymore?

6. Nintendo (NTDOY): This season’s South Park shows the kids fighting over Playstations and Xboxes, not Wiis. My mother still calls every console made since the 80s a Nintendo, whether it’s a Sega Genesis, iPad, or whatever. Nintendo’s ability to remain a household name despite having done nothing innovative in over a decade is probably the only thing keeping it alive.

7. Best Buy (BBY): They were already everyone’s favorite whipping boy of 2012, but the fact that they still exist means that somebody out there is still buying CD-R spindles and jewel cases. 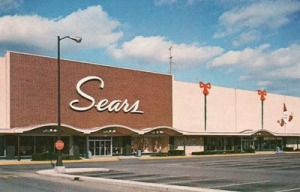 8. Sears (SHLD): I feel like this is a defensible business, because Americans will always need to buy washing machines and Craftsman tool sets. But maybe that’s not enough to save them from decades of mismanagement. As such, they have fallen from relevance.

9. JC Penney (JCP): I hope Mike Ullman pulls JCP out of the grave, because they’re a part of American history. But walking into one of these stores is like entering a Mervyns of last decade. I found myself wondering who on earth would voluntarily hold this asset. Then I saw the 83.4% institutional ownership. Kids, if you ever get a job, learn to manage your own 401k.

So how do these companies still exist? I assume that the ones with physical stores operate much like the Persian rug shops that line University Ave. We all know that the storefront is just a facade for mob activity (there’s no way Stanford students are buying this many Persian rugs).

So are these fallen angels potential high-yield assets or junk bonds? Wait and see! In the meantime, I am a perpetual optimist and have no plans to initiate any positions in the above-mentioned assets.

One thought on “How are these companies still alive?”