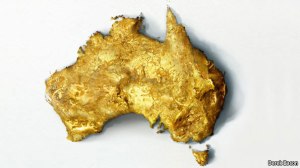 Two years ago, the Economist featured a cover story touting Australia as The Next Golden State. Perfect weather, beautiful beaches, and prolific government investments in higher education in hopes of building a technology hotbed to rival the one in the original Golden State.

Things were looking great. The commodities supercycle was going to drive economic growth FOREVER. Lucrative mining jobs brought an influx of immigrants – today, over a quarter of the population were born abroad.

Wages increased. Well, some did. Those employed in mining could earn salaries of over $200k with little training or education. For those outside the mining sector, wages were shit. People flocked to mining-related jobs.

The rapid population growth led to a housing shortage. Australia’s major cities did not have the infrastructure to support such quick expansion. By 2011, the rate of homelessness increased to 1 in 200, more than double the rate in the US. Many of the homeless were employed full time.

Good thing they were saving money by forgoing rent. The massive immigration fueled high income elasticity. The cost of living exploded. Sydney is now the third-most expensive city in the world.

Between 2009 and 2011, the Aussie dollar appreciated 43% against the USD. Tourism suffered. Manufacturers couldn’t find markets for their exports. Plants shut down, and their employees moved to support the mining industry. It was a classic case of Dutch disease. 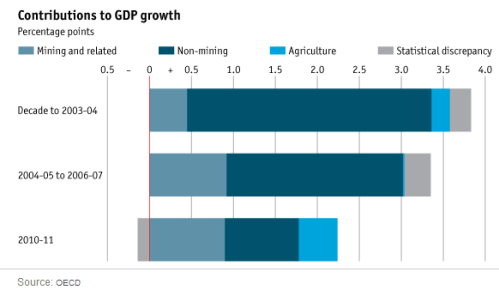 Now the commodities boom is over. The mining industry will shrink, and unemployment will rise. The country will need to rebuild its non-mining sectors. The AUD will fall, whether by tracking gold prices or through RBA monetary policies.

Dreams of building a Silicon Valley down under may be dashed. Much of the research funding provided to academic institutions came from the mining industry, whether directly or indirectly through tax revenue.

Australia may not become the next Golden State, but at least it can finally go back to being a cheap holiday destination for the rest of us.