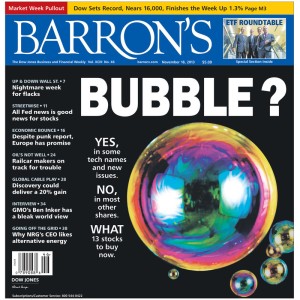 There are two types of humans: Opportunity-seeking, and risk-avoiding. Bubbles are caused by the risk-avoiding humans.

Most animals are risk-avoiding. When faced with both a predator and a mate, the animal will run from the predator before it tries to get laid.

75% of humans will respond in the same manner. The other 25% will knowingly risk getting eaten in order to go after the mate.

This is an attribute caused by a polymorphism in the DRD4 gene, where a repeated DNA sequence affects the dopamine receptor [1]. Children who exhibit this polymorphism are frequently diagnosed with ADHD. Adults with this allele often become drug addicts [2].

But without this genetic mutation, humans as a species might still be cowering in the low plains of Africa. The survival of a population depends on opportunity-seekers to risk their lives in search of new sources of food and land bridges to Alaska.

Of course, the species also depends on the three-quarters of the population that focus on not dying. After the opportunity-seekers have discovered Rama Setu and the Isthmus of Panama, then the fear of loss drives everyone else. Humans are pack animals, and the risk-avoiders don’t want to be dropped from the migratory herd.

Bubbles begin their life cycle when one or more opportunity-seeking investors plunge some amount of money into a crazy stupid venture like CatAcademy or Cheezburger. Risk-avoiders provide follow-on investments, because they remember the pain of having missed out on Groupon and Zynga. Before you know it, companies like Snapchat are getting $4B valuations because both Google and Facebook are desperately afraid of losing a contingency of broke-ass 20-year-olds to each other.

Google and Facebook are practicing risk-avoidance. If they wanted to be opportunity-seeking, they would invest in Barnacle.

This mentality does not only apply to startup bubbles. The people who bought dot-coms in 1999, the ones who bought real estate in 2003, the first investors to reenter the stock market in 2009 – they were all opportunity-seekers. The last people to buy dot-coms in 2000, the ones buying houses in 2007, and ones who are only now rotating from fixed-income – these are the risk-avoiders.

Just remember, risk-avoiders are the last ones to get laid.